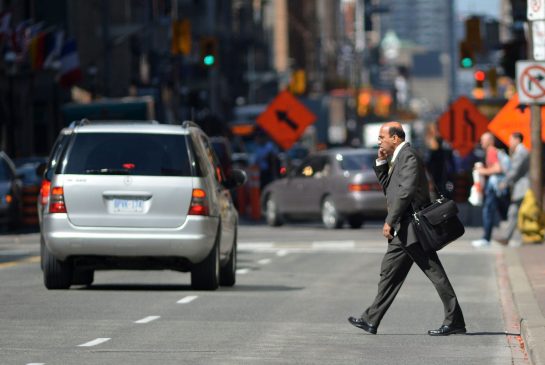 The act of crossing the street through an undesignated area — commonly known as “jaywalking” — is a behavior a lot of us are guilty of. Although jaywalking is dangerous (and illegal), many people choose to do it out of convenience. The fact is, most people don’t think they are going to be hit by a car if they quickly trot across the road.

Jaywalking may seem harmless in the moment, but it is very hazardous. Sure, you can look both ways before crossing the street and move fast, but these “safety measures” don’t actually make the act any less risky. A car can speed around the corner before you even realize, and if they don’t see you, you could be hit.

Pedestrian accidents often result in severe injury or death for the person who was walking. The impact of being hit by a car with no protection around you can cause broken bones, severe bruising, disfiguration, brain injuries, spine injuries, and many more potentially life-altering conditions. A pedestrian accident victim who was jaywalking may face another hardship in addition to their injuries: It is difficult to recover compensation in a personal injury case if you were jaywalking.

Jaywalking shows negligence on the part of the person walking, so if a driver was acting responsibly, the pedestrian could be mostly at fault for their own injuries. Negligence that is exhibited by the driver could attribute fault to them, and therefore give the jaywalking pedestrian a case for recovering compensation.

For example, the driver could be identified as liable if they were texting and driving, under the influence of alcohol or drugs, speeding, or violating other traffic laws. In these cases of driver negligence, the person behind the wheel can be determined as responsible for the accident, even though the pedestrian was also acting recklessly by jaywalking.

A jaywalker’s ability to recover compensation will depend on the laws in their state. In states that follow contributory negligence laws, their role in the accident could completely prohibit them from receiving damages. Conversely, in a state with comparative negligence laws, the damages they can receive may be reduced according to their level of negligence, but not fully forbidden.

Jaywalking can negatively affect your ability to receive damages through a personal injury claim, but it is not impossible. At B&D Law Group, our attorneys are not afraid to take on the difficult cases. Schedule a free consultation with our team to learn how we can help you.